The Rabbit On The Moon

I love Japanese pottery - setomono. I visited Imari, in northwestern Kyushu island, a place famous for the porcelain produced there. This is a photo taken in that area. Can you see the rabbit on the moon? 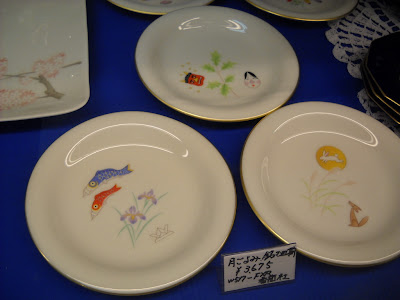 The story of the rabbit living on the moon exists in many cultures.
In the Indian Buddhist texts of "Jataka Tale," at some point four animals decide to offer charity on the day of the full moon. An old man was begging for food, so the monkey gathered fruit, and the otter brought some fish. Even the jackal stole some milk, to offer it to the man. The rabbit, always feeding on grass, thought that it would be too little for the old man's hunger. The rabbit threw himself into the man's fire, to become his food. The man was in fact Shakra, the ruler of heaven in Buddhist cosmology. Moved by the rabbit's virtue and selflessness, he drew a rabbit on the moon, for everybody to see it and remember its deed.
A similar legend exists in the Mexican folklore as well - the Aztecs imagined a similar story.

Buddhist texts were heavily introduced to Japan long ago. In the Japanese version, there are also a fox and a monkey in the rabbit's story. Rabbit and fox are fierce enemies. In one story, hunters were approaching and the fox was explaining the rabbit how many ways the former had to elude and escape the hunters. At hearing the hunters' dogs nearing, the rabbit simply ran away. While the fox remained behind, thinking of which way to choose, where to hide, how to fool them. Of course, the fox was shot dead. I can see that fox watching the rabbit running. On the moon.

In Japanese, the rabbit is usagi 兎, also in kana うさぎ or ウサギ.
Posted by Nadia at 3:38 PM