Japanese Proverb - Three Heads Are Better Than One 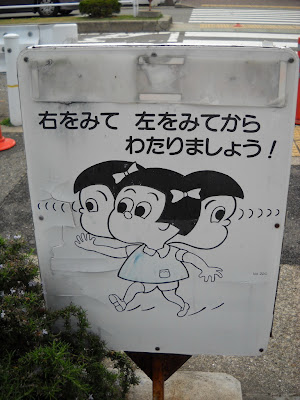 It says migi wo mite, hidari wo mite kara, watarimashou - look right, look left, then cross the street. Though there are other three-headed characters as well, like the three-headed Daikoku deity called 三面大黒天 Sanmen Daikoku(ten) who protects the Three Buddhist Treasures, this three-headed girl reminds me of a Japanese proverb.

It is interesting, they say "Two heads are better than one" in English. That goes in two's in the European languages, too. "Deux têtes valent mieux qu'une" in French. In Japan, tasks are managed in a group rather than individually. Japanese culture is group-oriented and people tend to work together. An extra "head" is always welcome.
Posted by Nadia at 5:31 PM