Horagai 法螺貝 are big conch shells used as a trumpet in old Japan. We can notice them sometimes even in Japanese films and dramas. 貝 kai means shellfish. 螺 nishi means spiral. Hora had various functions, religious and also used as samurai signals. The wooden or bronze mouthpiece helps produce three or five notes, which is unique. Shells usually produce only one note. When used for military purpose, it is called jinkai 陣貝 - war shell. The first kanji means team. The conch shell was “borrowed” from India, where the shankha shell is still a ritual object in Hinduism. It is an auspicious instrument, and its deep sound was considered probably to awake the disciple from the slumber of ignorance. And it was blown in ancient India even to announce a battle, as mentioned in the Mahabharata. Then it was incorporated in the eight auspicious symbols of Buddhism, together with the fish, lotus, and others. I like the Sanskrit and Hindi script a lot. Shankha is written शंख - it has the roundness of a shell.
I learnt that “blowing a shell” – hora fuki, hora wo fuku – can also mean to tell a lie or to exaggerate. ほらを吹く, to talk big ( ^ _^ )
Big shells, good for making a trumpet, are bursa bubo and the Fijian shell.
These are photos taken in Yoshino. 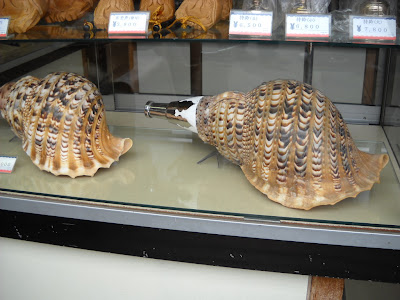 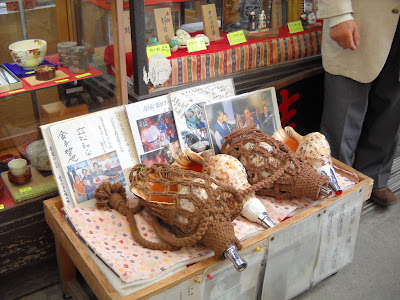 A moving sound of the past.