Information in English online about this beautiful statue is unavailable. At all. It may seem difficult to explain its meaning, in fact. I wanted to understand what it represents. 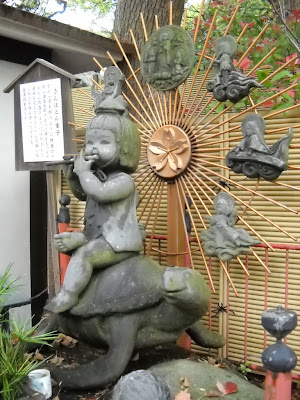 Its meaning may easily reveal from the kanji: 金浦敦童子, where きん kin stands for 金太郎 Kintaro, ぽ bo is the abbreviation for 浦島太郎 Urashima Taro, and とん ton reminds of 敦盛 Atsumori. Parents may pray here to have healthy children like the character Kintaro from a famous Japanese story, with a dream like Urashima Taro from another story, and to have a gentle heart and love music like Atsumori Taira - a samurai of Heian Era. It is surprising how three different characters, both from fairy-tales and actual history, combined into one statue representing a protector of all the children.

In the background, cute stylization of Bosatsu on clouds. I saw many Bosatsu on clouds at Byodo-in, the famous temple in Kyoto. There are 52 of them there, dating from the Heian period. Bosatsu on clouds have a remote Indian origin, and are considered to accompany the departed to Amida Buddha's Pure Land. Amida in Japanese derived from the Sanskrit Amitabha, meaning "of divine splendour" and "infinite radiance."

It is a photo taken in Sumadera, a temple in Kobe I mentioned in the post on 27 October as well.