Fukurou 梟 - Owl And Its Meaning In Japan

There are so many representations of owls everywhere in Japan, ranging from statues placed in gardens to lucky charms. I have asked several people about its meaning, and in most cases the answer was a wondering similar to mine. Of course, I would know that owls are related to Athena, the goddess of wisdom in the Greek mythology.

Owl is fukurou in Japanese, and because it includes the work fuku 福 meaning "luck" it was linked with good fortune. Apart from a symbol of luck, the owl protects against suffering and hardship, because fukurou can be written as 不苦労 as well - fu means "no" and kurou means hardship, suffering. 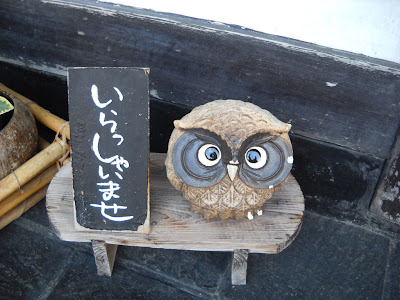 They are so cute. 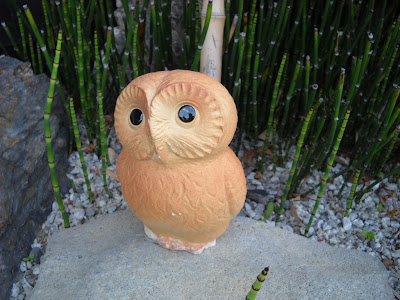 Owls are popular lucky charms, called 縁起物 engimono. I once read that the size/shape and colour of the owl have influence, hence a wide variety of owl souvenirs in Japan.

In the "Handbook Of Japanese Mythology" by Michael Ashkenazi I read about Chikap Kamui, an owl deity considered to be the watcher or master of some area. So I imagine owl statues guard and protect the gardens. Kamui is an Ainu deity.

I would like to learn more about the meaning of owls in Japan from you, so kindly write a message or a comment.
Posted by Nadia at 2:48 PM