Inoshishi is part of the Japanese culture and mythology. It is one of the 12 Chinese zodiac symbols.
The Chinese zodiac is said to have been introduced in Japan in 604, during the reign of Empress Suiko.
The wild boar roams the forrests of all Japan, except for Hokkaido. It was called yamakujira in the past, meaning "the whale of the mountains." Nowadays, boar meat is marketed in Kyushu Island as yamakujira, its old name. It is considered a delicacy, and 100 gr of wild boar meat sells for 500 yen.
During the Edo period, its meat started to be eaten and it was called botan, peony. Till date, there is a stewpot dish called botan-nabe, where the slices of boar meat are arranged beautifully on a plate, in shape of peony petals. Many restaurants serve wild boar meat in sausages and stews. Wild boar ramen is available in Okayama.
The baby boar is called uribou, the "melon boy" - obviously because of its shape and the stripes resembling a melon.
The boar is considered a dangerous animal, sometimes attacking people and damaging crops. It appears in the Japanese folklore, as the boar gods in "Princess Mononoke" or as Inosasao - the boar with the back covered in bamboo leaves. Inosasao was killed by a hunter, and came back as a ghost to obtain revenge. Eventually he turned into a giant demon who ate travellers.
As a god, Inoshishi is considered to bless pregnant women. Most likely because wild pigs breed many babies. 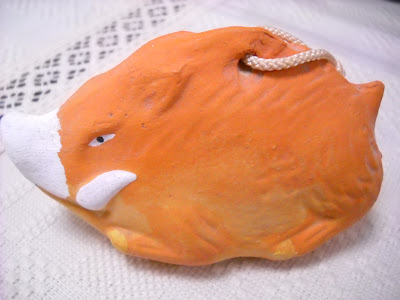 I found so very few sources related to inoshishi and the Japanese beliefs related to it. Maybe its roots go down to the Indian mythology, where Varaha - the third avatar of Vishnu, has the form of a large boar. He rescued Prithvi, the Earth goddess, from the grasp of some demon called Hiranyaksha.

In case you know more about inoshishi, kindly drop a comment. I am curious to learn more about it. :-)