Kaeru 蛙 "frog" and kaeru 返る "return, come back" sound alike. Okane ga kaeru can mean "money will return" or "money is frog," and this pun in Japanese language made Japanese people have a penchant for frogs. While the kanji are different, the pronunciation is the same for both "frog" and "return." Thus, frogs are linked with things and people returning to a place. Frogs are lucky to keep around. They bring friends, money, and good things back at some point. There are lots of frog objects everywhere at sight. I was lucky enough to see somebody's impressive collection of frog objects, shelves upon shelves covered in such cute trinkets.
Maybe also the agriculture based on flooded rice paddy made the presence of frogs be considered to bring good fortune. As far as I know, there are actually only 27 species of frogs in Japan. And I was told that there is some "black frog" hard to see and with a "lovely song." I even heard it once. 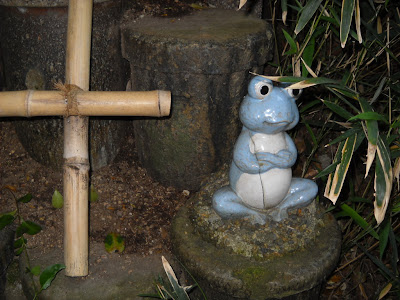 Frog appears in haiku as well, as a kigo -- seasonal reference -- of spring and summer. The most famous one is Matsuo Basho's haiku about a frog jumping noisily into an old pond. It is so famous, that it has more than 30 famous translations as well - 17 syllables to touch our five senses and our sensitivity.
Posted by Nadia at 3:53 PM