Rokuonji is a temple belonging to the Shokokuji School of the Rinzai sect of Zen Buddhism. It was inscribed on the UNESCO’s World Heritage List in 1994.

This magnificent building epitomizes the so-called Kitayama Culture of the period. 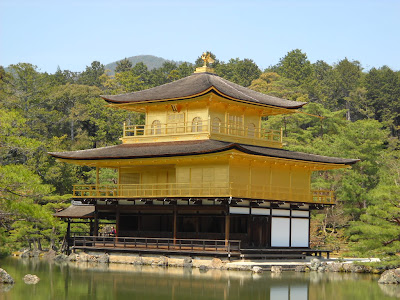 It was originally built in the Kamakura period (1185-1332).
The current location would shelter in 1397 the villa of the third shogun of the Muromachi Shogunate, Ashigaka Yoshimitsu. After his death, the villa was converted into a Zen temple named Rokuonji. Rokuon-ji 鹿苑寺 means "Deer Garden temple" - 鹿 shika, deer; 苑 en, garden; 寺 ji, temple. It is also called the Golden Pavilion and it is said that a part of Buddha’s ashes are enshrined here.

Shakyamuni Buddha - "The Awakened One of the Shakya Clan" - passed away in the northern part of ancient Kushinagar, located nowadays in Uttar Pradesh, India. His ashes were divided into eight parts, and Rokuonji may house a part of it. 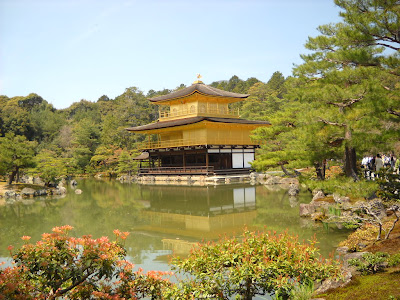 The pavilion is a three-storey building. Each floor is built in a different style. The first floor looks like a court nobleman’s residence, the second floor is built in the samurai house style, and the third floor in the Zen temple style. Gold leafing is applied over the lacquered surface of the building.

A Hoo bird was placed on the roof. It is a legendary bird of China, or a Phoenix bird. 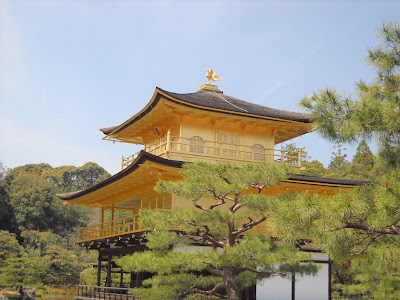 The pavilion was set on fire and burnt down in 1950, by a monk sentenced to prison and then released because of mental illnesses. Those events are presented as fiction in "The Temple of the Golden Pavilion" 1956 - the famous book of the legendary Yukio Mishima.

Around the temple there is a large stroll garden, designated as a Special Historic Site and a Special Scenic Spot by the Japanese government. While creating the garden, specially selected rocks were placed in the existing pond.
Posted by Nadia at 12:46 PM