The cow is a familiar god in many temples throughout Japan. Cows are protectors from illness. They are connected to agricultural rites as well, and considered to be a symbol of good harvest. The cow is regarded as a messenger of God in the temple.
It is believed that touching the cow will cure physical ills. 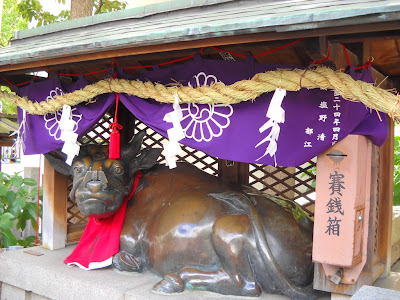 Along with Shinto shrines, Buddhist temples are numerous in Japan. The Buddhist temple is called tera (寺), and the same kanji is sometimes pronounced ji, so temple names often end with -ji or -dera. There is also another ending, -in (院), normally used for minor temples.

The cow is celebrated at times during the Bull Festival, 牛祭 (ushi matsuri). There is also a Buddhist festival held in Kyoto for the deity Matarajin, a god dressed in white and riding a black cow. Matarajin or Madarajin is a protector of the Amida Sutra, and the protector deity of the Fudaraku paradise.

Historically, there was a beef taboo in Japan - maybe to protect the livestock population or as a Buddhist prohibition to kill. Eating meat had long been prohibited in Japan, beginning with a decree in 675 that banned the consumption of cattle, horses, dogs, monkeys and chicken. This official prohibition was in place until 1872, when it was officially proclaimed that Emperor Meiji had eaten beef and mutton. Beef has increasingly become popular.

There are several beliefs and sayings regarding the cow in Japan. For example, if you lie down immediately after eating you will turn into a cow. At mid-summer there is a day of the cow, ushi no hi, when everybody should eat eel. The cow is also one of the 12 signs of the Japanese zodiac.

Some areas in Japan are famous for bull fighting, for instance Okinawa. These fights are held during late spring to early summer.

Finally, I would like to mention one lovely haiku by Issa, written in 1816:

牛もうもうもうと霧から出たりけり // ushi moo moo moo to kiri kara detari keri
with a moo moo moo
from among the mist
some cows appear
Posted by Nadia at 3:52 PM