Torii 鳥居 is the gate found at the entrance of the Shinto shrines. Its two kanji mean "bird" and "home/dwelling" respectively. It makes me remember that a friend actually told me about this meaning one day. And I remember how we both stood gazing at one such gate, smiling at imagining one bird resting on top of it.

Torii is omnipresent in Japan and looks like this: 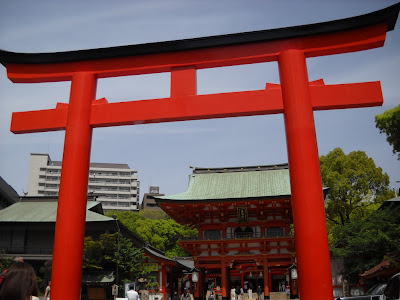 It marks a place to separate the worldly life from the sacred, since beyond it there is always a Shinto shrine. Its role is to purify. Shinto shrines are marked on the map or the GPS with an icon representing a torii.

There are several types of torii. Sometimes, it can be just two poles and a sacred rope called shimenawa tied between them. In the photo, there is one myoujin torii, with the upper part curved upwards. Myoujin torii 明神鳥居 is the most common one - and 神 means "god."

Origin:
Torii is likely to have evolved from the Buddhist and Hindu torana gates in India. Even the names are similar, as well as their functions. Only the architectural styles differ.

Relation with the birds:
In the Japanese traditions and legends, there is a relation between the white birds and the souls of the dead. Bird motifs in ancient Japan have been found in archeological sites, confirming the association between birds and the dead.

Colour:
I find this vermilion mesmerizing. It is a hue between orange and red. A friend taught me the name of this colour in Japanese. It is shuiro 朱色 or shu. It is the colour of life and eternity. Vermilion is part of some Hindu festivals and ceremonies, often applied on the forehead. And it went east - even the Shaolin monks wear it. It is a refreshing sight in Japan. I love this colour. It is splendid. Bridges are also covered in it. 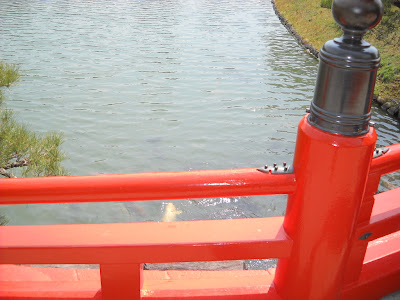 And lastly, I am sending a lot of love to my friends tonight, their memory is hovering in my spirit. One friend has constantly fed my curiosity and passion for everything related to Japan. Another friend found answers to my questions late in the night, countless times, searching in interesting books and encyclopaedias. And it is a longer list of meaningful friendships.

"Friend" itself means love. It comes from "freond" and "freogan" - to love, to favour. I have received a lot of love and favours, indeed. Even our "Latin" friend amicus comes from "amare" - to love.