Hotei is often mistaken for Gautama Buddha, and it is known with the Chinese nickname "Laughing Buddha." That would be a peculiar thing to say.

First of all, let's see what we are talking about. It is surely a familiar figure. 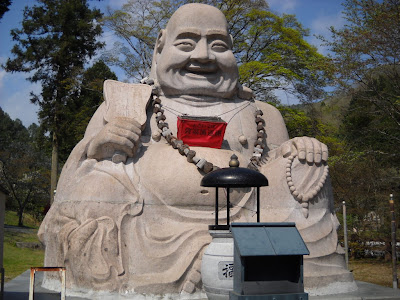 Hotei or Budai 布袋 seems to mean 布 nuno "cloth" and 袋 fukuro "bag, sack." Maybe because he sometimes carries a sack. He wears a robe, and prayer beads.

Buddha means "one who is awake, enlightened." Thus, it can be said that Hotei is a buddha, yet different from the Buddha. There is actually even a distinct visual difference between the two.

Hotei is considered to be the Maitreya - from the Sanskrit maitri, "friendship, kindness" - the Buddha who will come again on Earth when people completely forget the dharma. Maitreya is called Miroku in Japanese.

I received one such tiny statue in Belgium several years ago, with the advice to rub his belly for prosperity and good luck. Even in Japan he is one of the Seven Lucky Gods or Seven Deities of Good Fortune, Shichi Fukujin 七福神.

As for the prayer beads in the photo, they exist in various religions, since ancient times. Buddhism adopted them from Hinduism. There is a statue from the 3rd century BC depicting a Hindu wearing such beads. In Buddhism, there are usually 16, 27, 54 or 108 beads. There is a meaning behind their number, too.

I am a Christian and in my religion the prayer beads have 33 beads, because Jesus lived 33 years.

In Japanese, the rosary is called juzu, or prefixed with the honorific o-, ojuzu. It has a lovely kanji, 数珠 "number + pearl." It is a special jewel, with a special number. :-)

I would love to learn more from you.
Posted by Nadia at 3:00 PM