Summer is 夏 natsu in Japanese.

Summers in Japan are hot 暑い atsui and humid 蒸し暑い mushiatsui. This mushi means steam. It is a season to wear yukata - the informal summer kimono made of cotton. Yukata 浴衣 literally means "bath clothing."

There is of course the famous Obon in August, a festival honouring the spirits of the dead who return to their families for a while - the festival of souls.

Summer is a season for the fireflies. They are so important in the Japanese culture. According to a Japanese legend, the fireflies are the souls of the dead. It is a nice experience to watch them at night. Places for firefly watching are marked on maps and known by the locals. 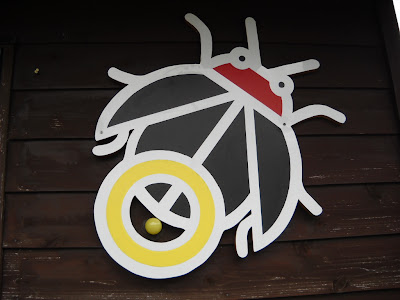 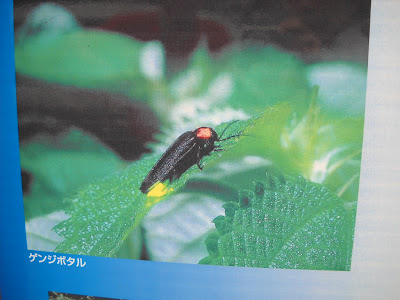 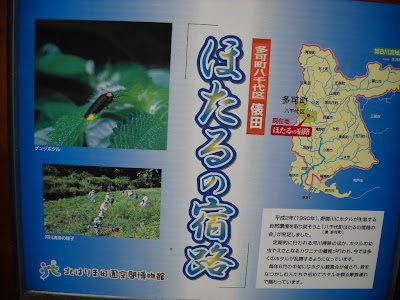 In another legend, the Moon Princess had to return to the Moon and sometimes she cries when missing the ones she loved on Earth. Her tears are fireflies.

Firefly is called hotaru ホタル.
There is an animated war tragedy film from 1988 called 火垂るの墓 hotaru no haka - "Grave of the fireflies." It is impressive when the firefly lights overlap the lights of bombs - indeed 9 August is a remembrance day when Nagasaki was bombed, three days after Hiroshima. (︶︹︺)
That image is a touching metaphor.
火 in hotaru, firefly means fire.

Summers have the echo of cricket and cicada sounds.
Some Japanese cricket handicraft: 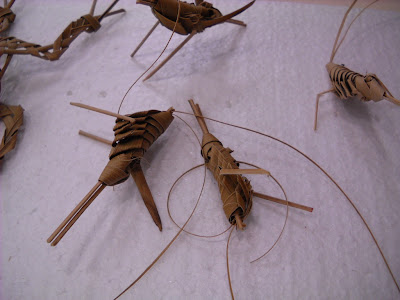 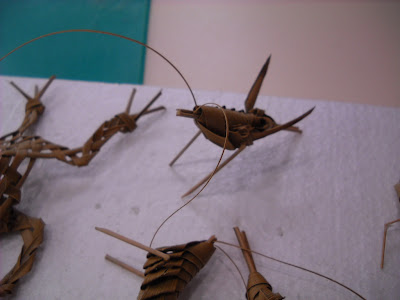 The sound of cicada 蝉 semi is called sometimes even semi-shigure, where shigure 時雨 means drizzle. A "drizzle of cicada songs" for a short while, appreciated in Japan.
雨 means rain, and it is almost visible out of the window in this kanji. :-)

Though it is a clumsy translation, still the emotion between the words can be enjoyed and admired.

On hot days, kakigouri is refreshing - the Japanese shaved ice that I presented on the blog at the end of July. I mentioned then that it comes in various flavours, I can show you now. The syrup in these bottles is poured on top of it according to the customer's choice and preference. 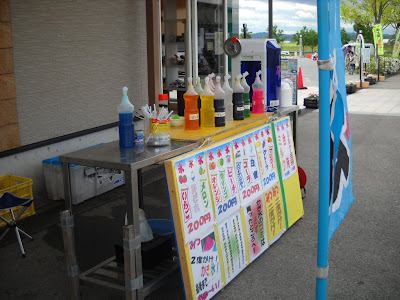 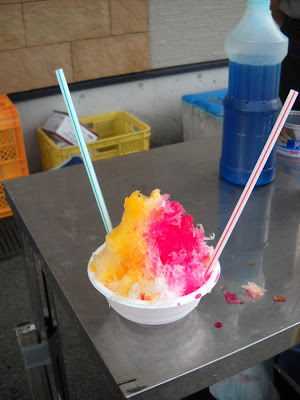 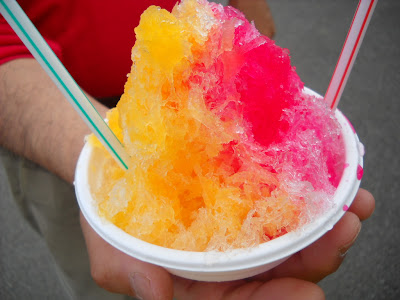 This is how kakigouri is written (and in the upper part I can see うまい umai - delicious, wonderful; though I have the impression that it is a word used by men only): 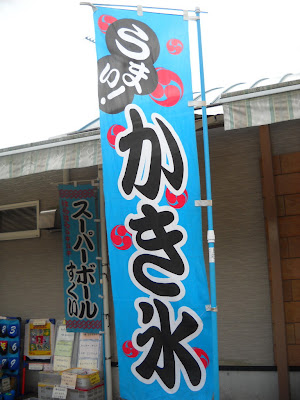 ﻿Summers have plenty of festivals and fireworks. Fireworks are called 花火 hanabi and are really spectacular in Japan. 花 means flower and 火 means fire.
I invite you to watch a 6-minute show of fireworks in Japan during an annual competition - Oomagari Fireworks - held since 1910 at the end of August.
This is last year's video, and I am showing the link with the author's kind approval. Since I enjoyed the video very much, I contacted the owner to ask for their permission. I am sure you will like it, too.

I wish you all a very good end of summer.
Posted by Nadia at 3:00 PM