Legend Of The Three Crows Of Arima Onsen; Crows In Japan

I mentioned Arima Onsen in the posts on 3 July and 5 July. It is a special place for onsen. On a sloping path called "Slope of Wish" there are three crows. One day, two gods came to earth and saw three injured crows bathing. After few days, they noticed that the crows had been cured. The water was a hot spring with healing effect. Thus, the three crows are worshipped as guardian deities of Arima Onsen. 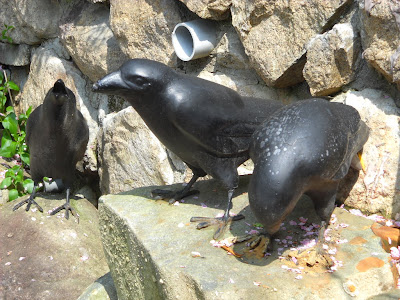 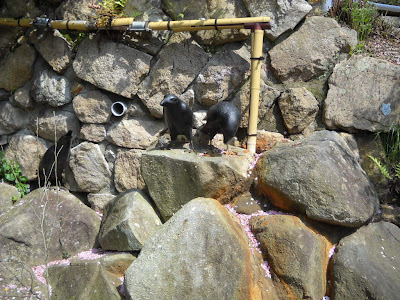 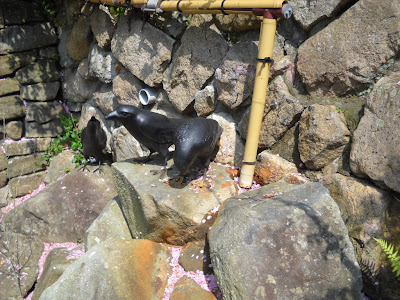 ﻿In Japanese mythology, there is even a crow with three legs called Yata-garasu (karasu = crow). Yatagarasu is mentioned in Shinto and depicted in the Edo wood art. The Crow-God Yatagarasu was sent to earth as a guide for Emperor Jimmu. It was one of the first three gods created in the Shinto creation story. Japan's National Soccer team has as a logo the three-legged crow.

Crow is a symbol of rebirth and rejuvenation, also of wisdom and knowledge. And karasu tengu are wooden spirits, like "crow goblins" - also teachers of secret fighting skills.

There are two black castles in Japan called "Crow Castle" - Okayama Castle and Matsumoto Castle. I showed photos of Okayama Castle in a post on 2 August.

In recent years, the high population of crows caused many blackouts in Japan.

Michael Ashkenazi wrote in his book on Japanese mythology about crows as well. He mentions an Ainu story, saying that at the beginning of times, the sun was swallowed by a monster. And the crow, Pashkuru Kamui, pecked at its tongue until it released the sun, the source of light and warmth. On another occasion, when the first Ainu were starving, the crow led them to a stranded whale, saving their life (page 117 of the book mentioned above). So generally, the crow is a bird of good omen in Japan.
Posted by Nadia at 5:07 PM